What changes when playing a Battlefield 4™ map that takes place at night? How can you best exploit this new setting and come out the victor? This tactical guide will get you started and ready for nighttime play in Battlefield 4 Night Operations when it releases in September 2015. 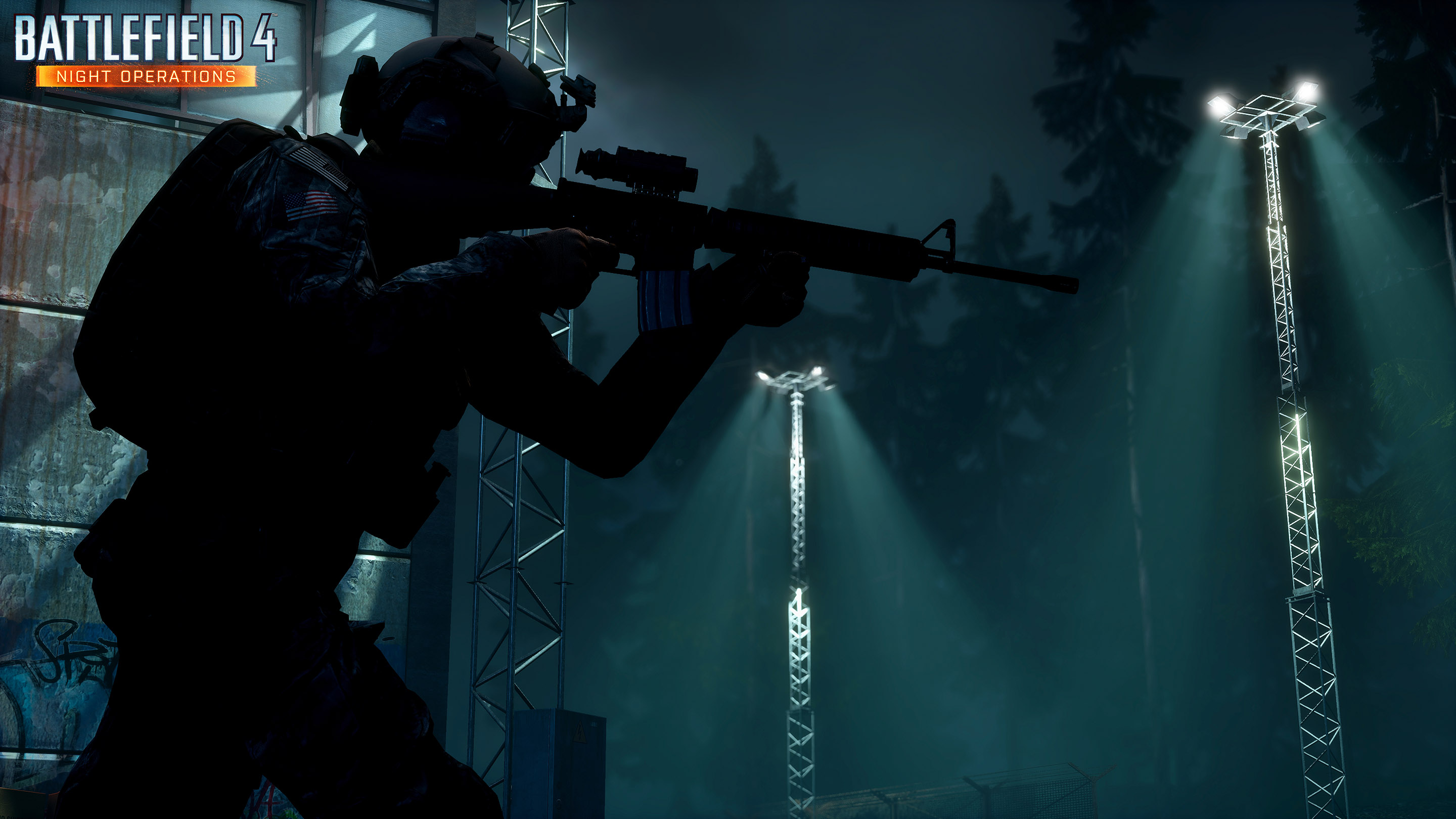 ON THE GRAVEYARD SHIFT
The new night map, Zavod: Graveyard Shift (based off of Zavod 311), is dark and has several differences to its daylight counterpart.

Here are some examples:

Destructible lights
At night, the map is littered with destructible lights, which you can use to your advantage. Want to make sure you gain the upper hand using night vision scopes? Take all lights out in an area and prey on your enemies!

Ground Level fog
At night, the exterior areas are blanketed in a thick fog – this fog makes it very hard to spot players on the ground from above – unless you sport a night vision scope…

Vehicle lights
All vehicles have lights, which makes anyone inside an easy target – don’t use vehicles if you want to stay hidden!

Flanking routes
With darkness descending on the map, using flanking routes on the side of the map is a very viable tactic to get around the center area and take a backside objective from the enemy.

Use new Gun Master to your advantage
We’ve added a new Gun Master weapon preset with night vision and utility in mind – use to practice night time play if you haven’t unlocked all the needed gadgets yet. It really shines when played on the alternate Gun Master layout on Zavod: Graveyard Shift! 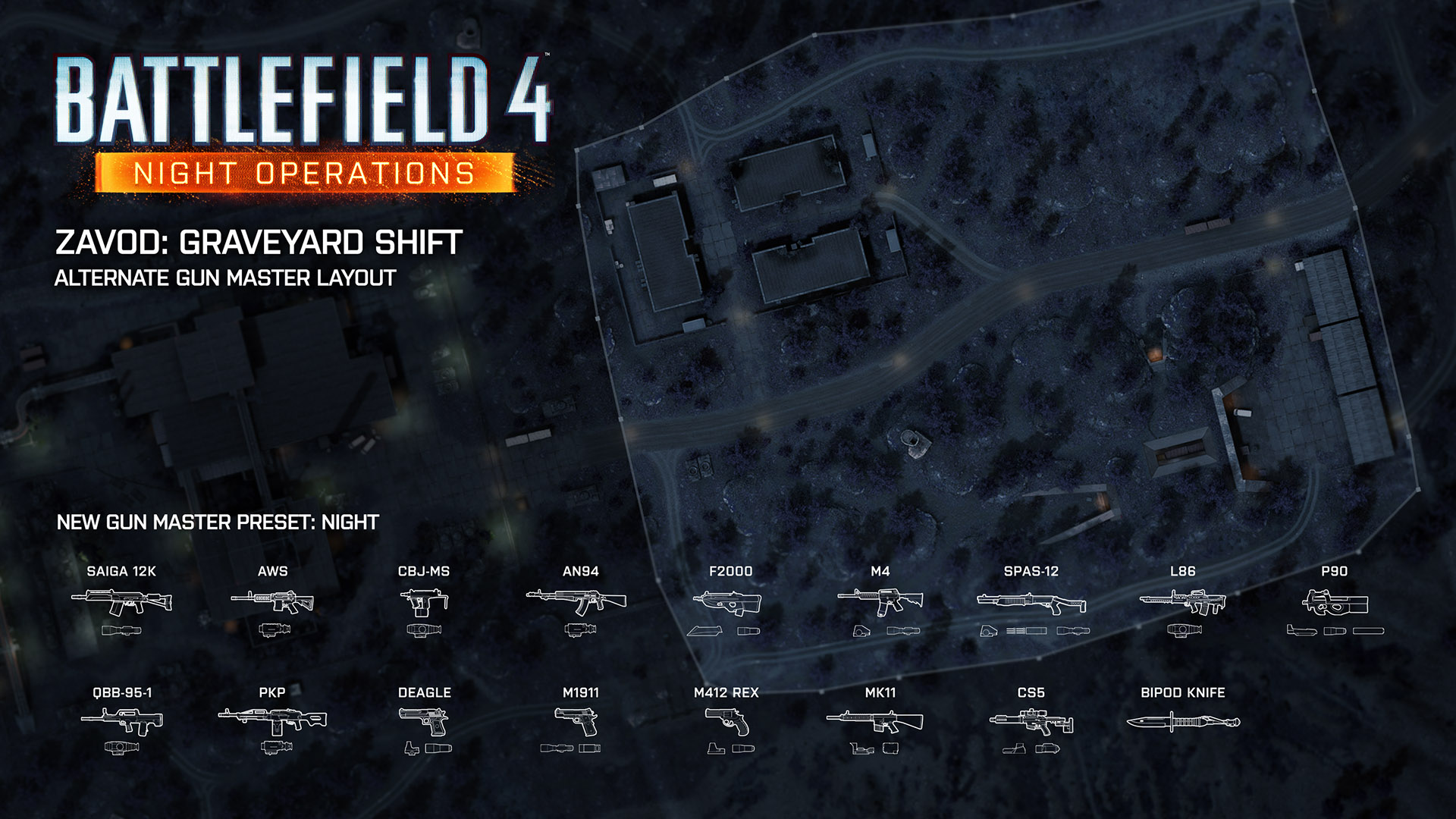 Battlefield 4 Night Operations release includes several improvements to “gadgets of the night” and their usability on the Battlefield.

Think about what cues you give off:

Sprinting
Gets you quickly from point A to B, but makes footstep sounds which makes you easy to pinpoint and prey on.

Vehicle usage
Being in a vehicle normally means relative safety, but headlights and engine sounds put a rather large target on your back

Flashlight, laser, and other weapon attachments
While great help in an engagement, they draw attention to your position and exact location. 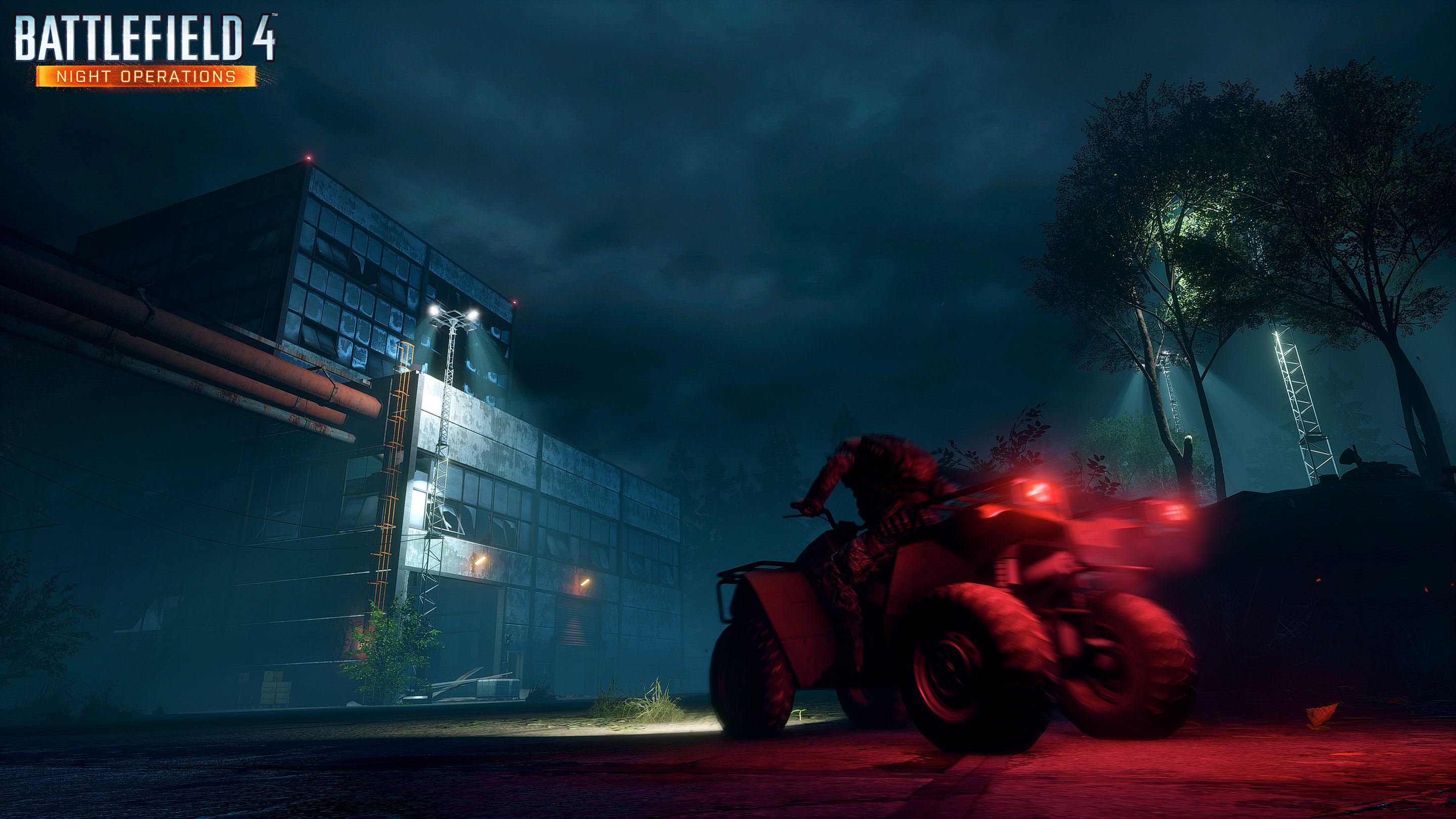 Smoke + Nightvision scopes
An oldie but goodie, chuck a smoke grenade into an area and using your night vision scope to pick off unsuspecting enemies. This works best in narrow passages, like the underground tunnel between C & D for instance.

Flare + LMG
Used as a Smoke + Nightvision counter, Flares negate the positive aspects of night vision scopes, and you’ll be able to blanket the area with bullets as it’s engulfed in smoke.

Flashbangs + Shotgun/PDW
A tactic viable in both and nighttime play. Using a flashbang against a night scope user gives you a significant advantage in the dark, even more so than using a flashbang under normal conditions. Clean it up with a well-placed shotgun blast and you’re deadlier than ever.

Dirty, dirty claymores & mines
Claymores are very effective at nighttime, especially if you are being hunted. Remember to use sounds to your advantage, or why not your flashlight? AT Mines are also very effective in negating that pesky tank, but they do have a new little red blinky light attached to them, so you’re not all out of luck if you’re controlling a vehicle if you keep your eyes peeled!

We hope that this information equips you the tools you need for the night time playstyle.

See you during the Graveyard Shift!