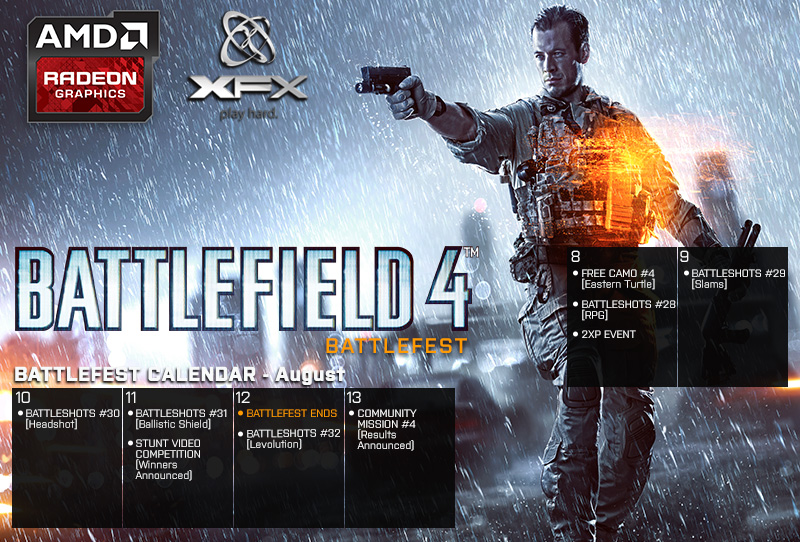 UPDATE 8/8: Above you will see the events scheduled during the last week of Battlefest. Thank you to everyone who participated. See you on the Battlefield!

As we head into the thick of summer, we wanted to do something for our fans and are kicking off a special event called Battlefest.  This is a festival built for gamers, specifically Battlefield 4, filled with weekly rewards, contests and in-game content.  It’s a fun way to give back to our community and say thanks, while doing some cool things in the game.  Not to mention, there will be tons of prizes, including graphics cards and three gaming PCs, provided by AMD.

Battlefest is just a small token of our appreciation and commitment to Battlefield 4.  In addition to this, we have DICE teams in Stockholm and LA continually working on improving the gameplay experience, adding new initiatives like the CTE environment, and also developing the next two expansions packs, with Battlefield 4 Dragon’s Teeth releasing next week for Battlefield 4 Premium members.

To get Battlefest started, we’re giving everyone a weekend of double XP from July 12-13, so if you need to level up your game, now is a good time to start or get back into the game.  The 12th also marks the first day of our daily contest (called Battleshots), where we’re asking you to send us a screenshot in Battlefield 4 based on a different theme requirement.  Each daily winning entry will receive an AMD graphics card, $50 gift card to the DICE Store, and a Battlefield 4 Premium membership on their platform of choice.  We’re excited to see what you send in and will be altering the screenshot theme request daily until August 13 for more chances to win.  Official announcement to come; official rules can be found here.

Beyond the daily Battleshots contest, check out these other initiatives we’ll be doing during Battlefest.

- Free Camo Unlocks
Each week we will be releasing a free camo in-game for all players.  This will give you more ways to standout on the battlefield.

- Double XP
As noted above, we’re kicking Battlefest off with a double XP weekend and we’re definitely going to end with one too for all players to reap the benefits.

- Community Missions
Each week we will be hosting a global community challenge to reach a specific goal in-game.  If you reach the goal, everyone who logs in will receive a free gold Battlepack the following week.  The first mission starts on July 15, 2014, where you will have to collectively reach 15 million revives across all platforms, with the mission ending on the eve of July 20, 2014.

- Stunt Video Competition
This a month long contest where we are asking you to send us your best stunt video that can only be done in Battlefield 4. Once we receive the submissions, the DICE team will pick the top 12 and then you, the fans, will vote on the top three winners to win a massive prize.  Official announcement to come; official rules can be found here.

Featured Prize Sponsor of the Week

And there it is, a month filled with fun activities and prizes to be given that we hope you’ll enjoy.  But that’s not all, we have more surprises in store that we’re excited to share in the next couple weeks.  Be sure to keep your eyes peeled.  Happy Summer Gaming!

* THIS OFFER IS BEING ISSUED TO YOU FOR PROMOTIONAL PURPOSES ONLY AND DOES NOT CONSTITUTE A CREDIT, CHARGE, DEBIT OR GIFT CARD. BATTLEFEST IS FROM JULY 12, 2014, THROUGH  AUGUST 13 , 2014 (“PROMOTION PERIOD”). REQUIRES BATTLEFIELD 4 (“PRODUCT”) ON APPLICABLE PLATFORM AND INTERNET CONNECTION TO ACCESS IN-GAME CONTENT. PC VERSION OF PRODUCT ALSO REQUIRES ORIGIN ACCOUNT, ACCEPTANCE OF THE ORIGIN END USER AGREEMENT AND INSTALLATION OF THE ORIGIN CLIENT SOFTWARE (WWW.ORIGIN.COM/ABOUT). YOU MUST BE 13+ TO REGISTER.  BATTLEPACK CODES EXPIRE SEPTEMBER 13, 2014.  A GOLD BATTLEPACK WILL BE AWARDED EVERY TUESDAY FOLLOWING THE END OF EACH COMMUNITY MISSION FROM 4AM PDT TO 3:59AM PDT THE NEXT DAY AND IS AUTOMATICALLY ENTITLED WHEN YOU LOG INTO PRODUCT DURING THAT DAILY TIME PERIOD.  DOUBLE XP IS AUTOMATICALLY ENTITLED FROM JULY 12, 2014 AT 2AM PDT THROUGH JULY 14, 2014 AT 2AM PDT AND FROM, AUGUST 9, 2014 AT 2AM PDT THROUGH AUGUST 11, 2014 AT 2AM PDT.  THE CAMO IS AUTOMATICALLY ENTITLED EACH FRIDAY OF THE PROMOTION PERIOD STARTING JULY 18, 2014 AT 5AM PDT.  EA ONLINE PRIVACY AND COOKIE POLICY AND TERMS OF SERVICE ARE AVAILABLE AT WWW.EA.COM. SEE APPLICABLE END USER LICENSE AGREEMENT AND DISCLOSURES ON WWW.EA.COM/1/PRODUCT-EULAS. VALID WHEREVER BATTLEFIELD 4 IS OFFERED. CODE MAY NOT BE SUBSTITUTED, EXCHANGED, SOLD OR REDEEMED FOR CASH OR OTHER GOODS OR SERVICES. MAY NOT BE COMBINED WITH ANY OTHER OFFER, GIFT CARD, REBATE OR DISCOUNT COUPON. VOID WHERE PROHIBITED, TAXED OR RESTRICTED BY LAW.