A new server update for Battlefield 3 is rolling out tomorrow on all formats, bringing more balancing tweaks to the Armored Kill gunship and the long awaited option to remove the minimap in Hardcore mode. Read on for the full details

You should see this update in effect starting 08:30 UTC October 11th (click link to see the corresponding time where you live). It usually takes ~6 hours on consoles for these updates to be rolled out to all servers worldwide. On PC you should see these updates in about 24 hours on a majority of the servers.

NOTE: During 08:00-08:30 UTC on October 11th (click link to see the corresponding time where you live) both Battlelog and the game backend will perform scheduled maintenance. During this time, you will not be able to play Battlefield 3 on PC or consoles. 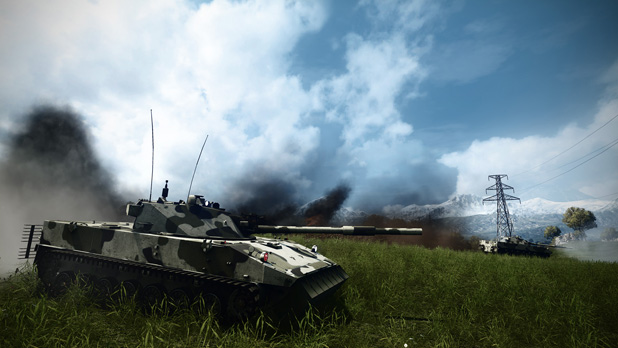 Gunship balance tweak in Rush mode
The Armored Kill gunship received major tweaks already in the last server update. We are now further tweaking it based on community feedback. It now only respawns after the attackers have destroyed an M-COM in Rush.

Rationale: The gunship has been a bit overpowered and spawning too fast in Rush, especially on servers running modified vehicle spawn times. This tweak makes the gunship only spawn for the attackers after each crate, except the initial spawn on round start. In effect, this means that after the gunship is destroyed, a new M-COM needs to be destroyed before the gunship can respawn at all.

Rationale: The gunship has been spawning too fast on servers running modified vehicle spawn times, making it hard to regain control of the flag controlling the gunship. This tweak will make the gunship spawn every 60 seconds independent of server settings.

Rationale: It’s been a requested feature from the community to be able to remove the minimap in hardcore mode. We are now adding a new preset on consoles for server admins to use called “Hardcore no map” which disables the minimap and keeps the rest of the Hardcore settings intact. On PC, you disable the minimap with the server command “vars.minimap false” that is now permitted on Hardcore servers. Enjoy!

Improved server stability
Improved connectivity between game servers and the back end, significantly reducing the number of times a server times out and kicks players.

Knife takedown fix
Fixed so that there can be multiple knife kills at the same time on a server.

Rationale: We had a bug where only one knife takedown could take place at any one time on one server. If you attempted a knife takedown at the exact same time as someone else on the server, the takedown animation wouldn’t play, and your opponent wouldn’t take any damage. This has now been fixed.

Rationale: Earlier, Premium members would get an inflated chance of becoming MVP/best team during Premium exclusive double XP events, since these ribbons were calculated based on total score. Using base values all across the board now removes this artificial advantage.

Kill list fix
Fixed the bug where a kill was listed as a vehicle kill when the player actually killed someone with a mine or similar weapon. Another example where this would occur was if you fired a Javelin, then entered a vehicle before the Javelin hit its target.

Radio beacon exploit fix
Fixed the radio beacon exploit where you could place it above the roof and then spawn on it to access areas that are not meant to be accessible. This glitch was reported on Operation Métro and has been removed.

Ladder/vehicle entry fix
Fixed so that players can no longer enter vehicles while climbing a ladder.

Let us know in the comments section below what you think about these tweaks and fixes.