Fans of Battlefield 4 can now come together as one persistent unit and show the world where they belong. Rolling out starting February 27 as part of the Player Appreciation Month, the first iteration of Platoons is coming to Battlefield 4.

UPDATE:
Platoons are now available for all Battlelog users. You will find it in the Soldier dropdown menu, as well as on a new tile on Home. Leave feedback for Platoons in this Battlelog forum thread. Furthermore, you can now recruit members, or find the Platoon for you, on the Battlelog Forum under “Platoons”.

Show the World Where You Belong
Platoons in Battlefield 4 is a way for you and your friends to get together, organize yourselves, communicate, and fight together to improve your Platoon. Whether you want to share experiences in a more private space, or show the world who has the most skilled, most awesome Battlefield 4 team around, Platoons is the way to go. 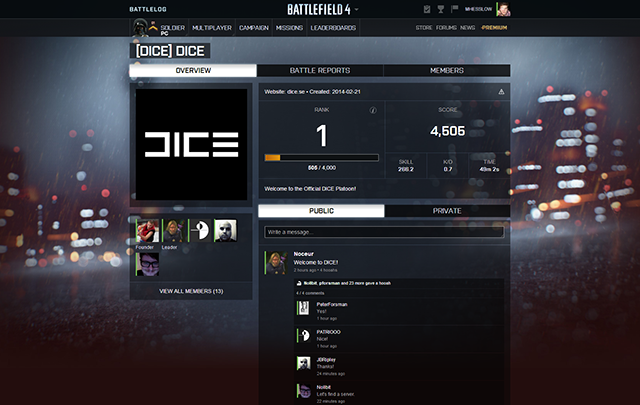 Platoons in a Nutshell
So what can you expect when Platoons launches during this and next week? Let’s look at the main features you will have access to in the first iteration of Platoons:

• The ability to create and join a Platoon for up to 100 members.
• Basic Platoon management such as inviting, applying, and promoting/demoting members.
• A private and public Platoon feed, where you can communicate and coordinate.
• A Platoon emblem and tag that all members can easily apply.
• The ability to earn stats for your Platoon and rank it up, and see all the matches you played together.

Our goal is to make it both fun and easy for you to get organized and be part of the best Battlefield 4 Platoon ever created. Whether you want to discuss your past games and plan the next, or get competitive and see who your Platoon is up against, the feature will be as powerful and intuitive as possible.

Make Your Platoon Stand Out
There will be several different customization options for your Platoon. Apart from setting a Platoon name and 4-character tag, you will of course also be able to design your very own Platoon emblem, which all members can easily use as their own. If the emblem gets updated, for example, you don’t need to worry; the changes will automatically be applied and your Platoon tag and emblem will without extra effort follow you in-game. Besides that, you can write a presentation text for your Platoon and set the address for your website, if your Platoon has one.

Earn Stats for your Platoon and Rank Up
Platoons for Battlefield 4 also feature a brand new progression and stats system. In order to earn stats, four players from the same active Platoon must play together in the same round of BF4, and then your core stats will be either averaged or accumulated and applied to the Platoon. Best of all, you will earn score for your Platoon, so you can rank it up (initially, ranks 1-10 will be available, with more ranks to come). Other stats such as Kill/Death Ratio, Score per Minute, and Skill will also be shown for your Platoon. 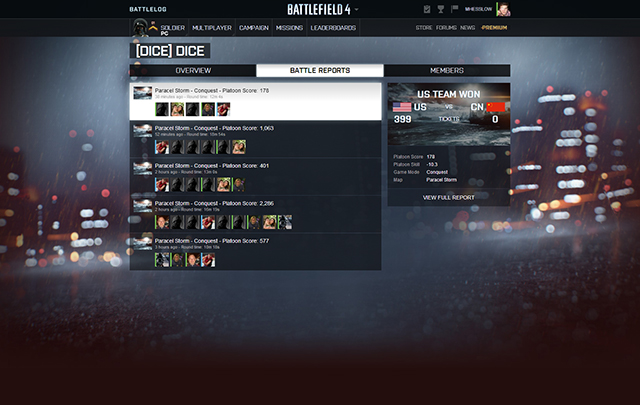 Discuss your Matches and Have Fun in the Feed
The core way to communicate within your Platoon is through the feed, which has both a public and a private section. In the public section, you can allow anyone to leave a message, whereas the private area is for members only. All messages can be commented on, leaders will be able to sticky messages to the top of the feed, and perhaps best of all, you can subscribe to messages, so that every time someone comments on it, you will receive a notification, so you can return to follow up.

Rolling out on February 27
We will begin to open up for Platoons on Battlelog on February 27, with some players getting access slightly before others in order to ensure proper feature stability. When it is launched during this week and next, everyone will be able to join a Platoon, but until March 13, Battlefield 4 Premium and a soldier with at least rank 10 will be required to create your own Platoon. The system is also completely platform agnostic, so anyone can join a Platoon no matter where they play Battlefield 4.

It is important for us to clarify that this is the first iteration of Platoons. We will continue to work on the feature to refine and expand it, but now we will finally have the opportunity to see it in action and get some real-world feedback. Now is the time for all our players to tell us what they like, what they want improved, and what they want to see next.

Don’t hesitate to tell us what you expect from the upcoming feature, and what can be improved once it’s live. We appreciate your questions and feedback!